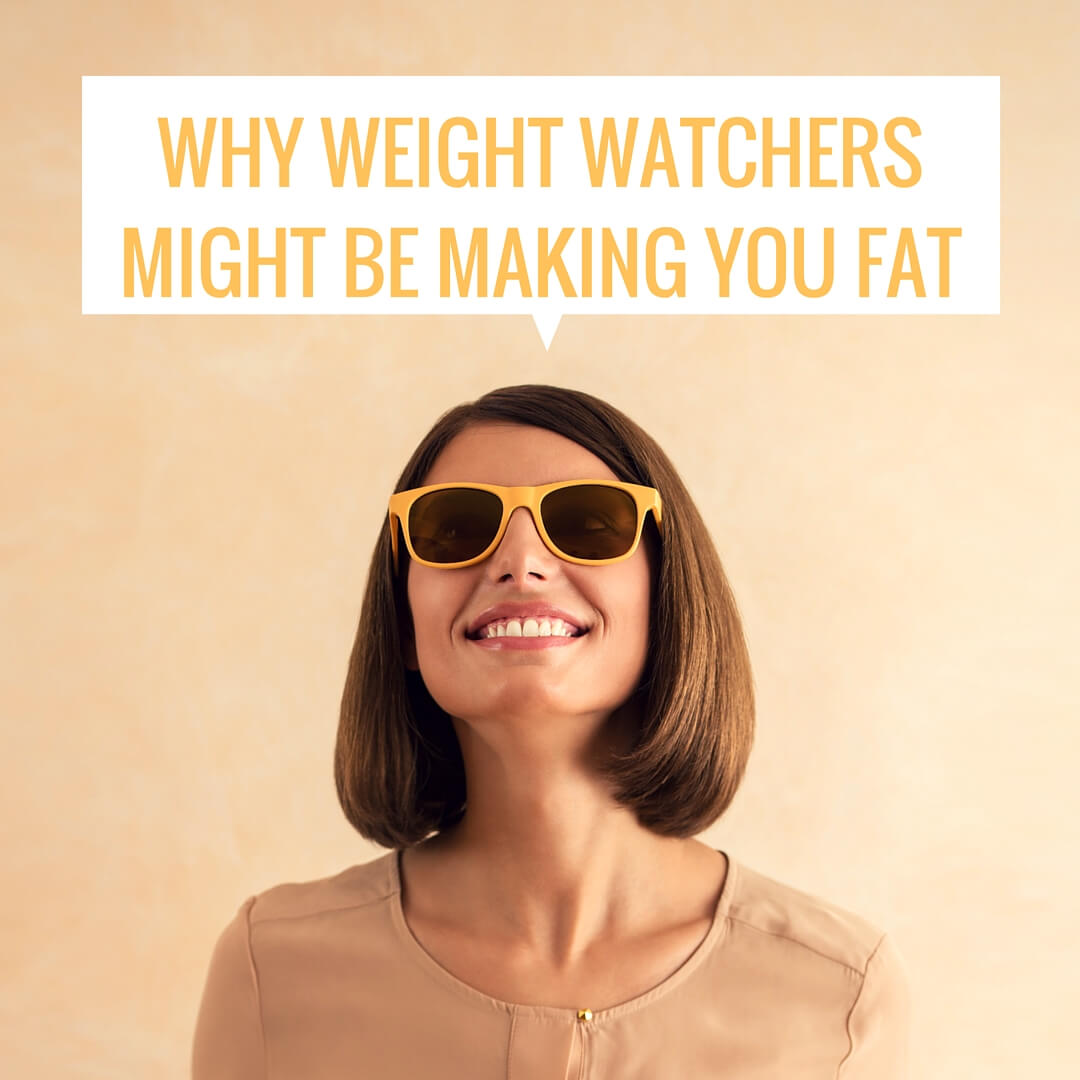 Could it be possible — that the very diet — that you follow to a T  … is making you fat if you have PCOS ? Abso -friggin-lutely!

Given the fact I have been successfully helping women with PCOS lose weight for the last decade,  it is fair to say I have seen my fair share of diets. However, one thing I can tell is certain Weight Watchers and PCOS don’t mix! 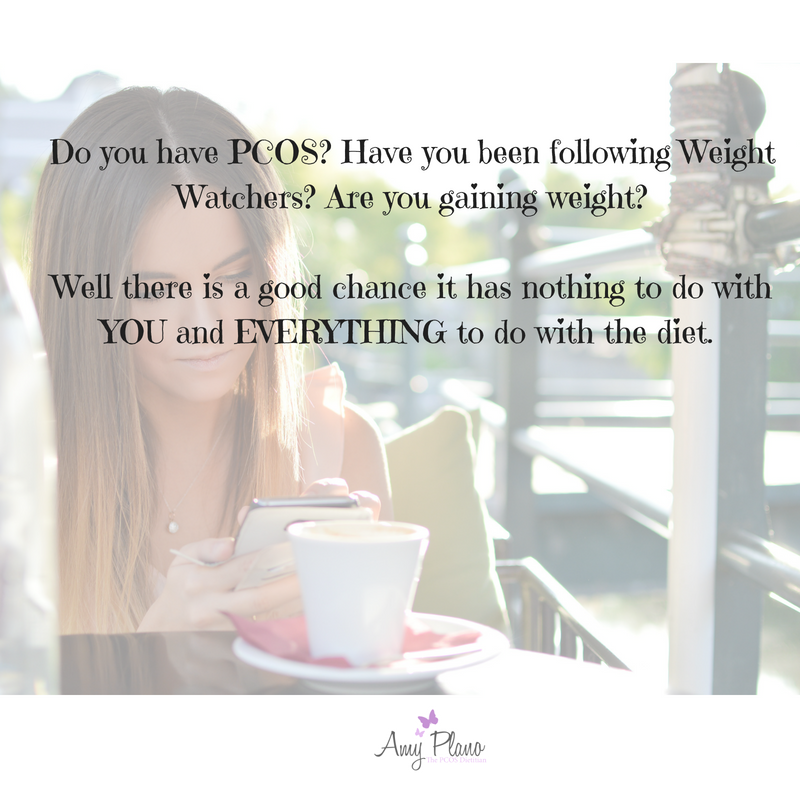 Typically by the time most women find me, they have been struggling for quite some time with their weight. They have tried every diet out there with minimal success. I don’t think there has been one woman who has exited their initial visit with me not having an “ah-ha!” moment. When women leave my office, it’s often with a sigh of relief — like a load has been lifted off their shoulders. What they have been doing for so long has been so wrong — but they have been brainwashed to think that it is SO right. That folks is the true definition of frustration! No bueno!

Let me tell you why.

Why Weight Watchers doesn’t work for women with PCOS

Every time we consume carbohydrates of any kind (it doesn’t matter if it is fruit, oatmeal or a sweet potato!) our bodies break down the carbohydrates into glucose. In response to glucose your angry body dumps out the hormone insulin. Insulin is what we consider a storage hormone. This means when insulin is circulating in our blood system – our bodies do not break down body fat for fuel – but instead it goes into fat storage mode. 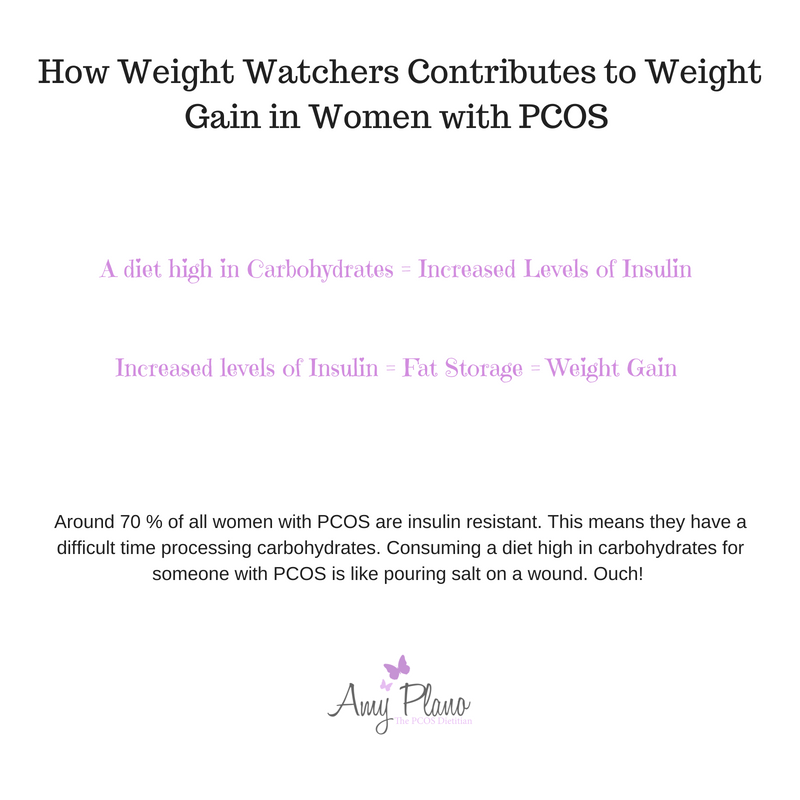 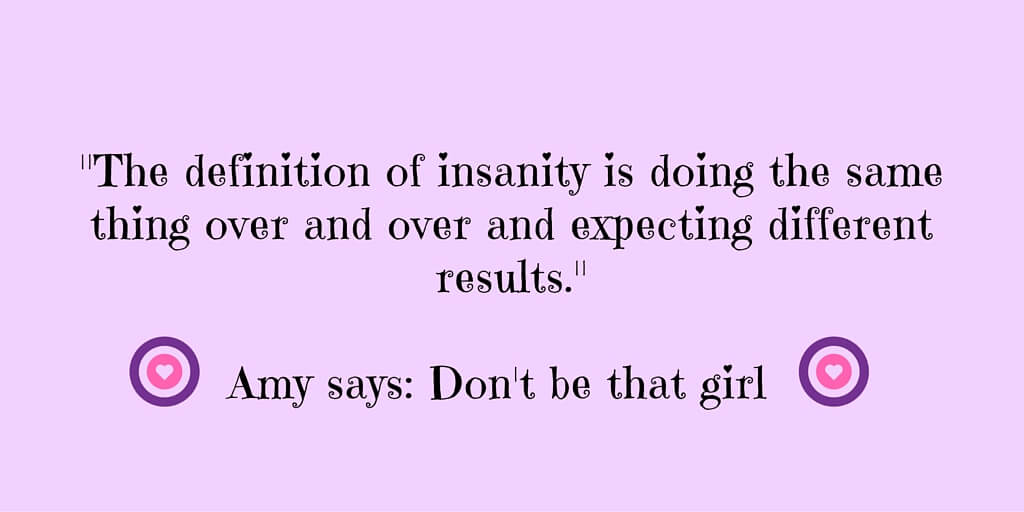 So back to Weight Watchers and why it could be responsible for making you fat if you have PCOS. On a typical Weight Watchers program you are eating carbohydrates all day. Breakfast — Special K Cereal (Carb) with Skim Milk (Carb) and fruit (Carb) Lunch – Turkey Sandwich (Carb) with pretzels (Carbs) and a yogurt (Carb) Dinner — Chicken, Sweet Potato (Carb) and broccoli. Snacks – Flavored Greek Yogurt (Carb), Apple (Carb), Skinny Cow (Carb). As you can see there is no shortage of carbohydrates. You mine as well be fueling for a marathon!

I want to make it clear – I have nothing against any of these foods. But for women with PCOS this style of eating creates an insulin disaster! All day long your body is getting flooded with carbohydrates that drives your insulin through the roof. Therefore, on a program like Weight Watchers you become a fat-storing machine – completely the opposite of what you want!

I think Weight Watchers is fantastic for many things – one being accountability. Also for many people it clearly works – and I cannot deny that! But I lie to you not – Weight Watchers is NOT the appropriate program for someone with PCOS trying to lose weight. I work with MANY women who actually gain weight while on a Weight Watchers program. If this is you — do not blame yourself. I bet you are spot-on with your points — it is just not the right program for you.

The right weight loss diet for women with PCOS

In future blog posts, I’ll discuss what a typical day looks like at these carbohydrate levels. But in the meantime if you are hanging with the ladies at Weight Watchers and you have PCOS, please promise me you will cut your ties?

I’m only saying this for your own good – I promise.

Got questions on why Weight Watchers could be making you fat if you struggle with PCOS? Please post them in the comments below. I would love to hear your thoughts.